I am writing this in May, the coldest May for 178 years, which followed a very warm April and in Suffolk at least, pretty dry January and February.

All this  unexpected cold is very unfortunate as I was planning to do a lot in the garden over the early May bank holiday.  Still the cold has inspried me to look at my wild life cameras and to write about our veg, bees and Moorhen.

No pretty pictures at the moment but I have weeded and planted the veg patch. I leave it to weed over during the winter so spring is always a bit back-breaking.  We have broad beans, rocket, red chicory and lettuces growing well (but slowly).  The winter cabbage has now sprouted and we have eaten much before it actually flowered. Now the hens have the luxury of finishing it off.

We have just started to get wonderful Asparagus and Globe Artichokes both my favorities and only worth eating fresh from the garden and in season (at least in my mind).  The strawberry bed is flowering up so I hope we will get a bumper crop this year. The orchard has had wonderful blossom on all the trees, I wonder if the cold will prevent much of it turning to fruit.

I am on a beekeepers register so if you have a swam and live nearby you can call me up and I will come and try to deal with it. The oil seed rape in the area and very warm April has caused the bees to get a bit cramped and some decided to decamp off to new accommodation. I caught my own swam and got a new hive ready, oddly be the evening the swam had largely gone. Having checked my hive, it would seem that they may have gone back home!  Both hives were full of bees, I now have two supers on and was hoping to take off the first lot of honey in early May ( that was before it went so cold). As luck would have it just as I was settling down after teh dissapointment of missing my swarm, the phone rang and someone in a nearby village wanted me to collect their swarm. They were keen I took it away immediately so I could not leave it in the skep until the late evening. Still I managed to get most of the bees into the Skep and wrapped it in a sheet then put it in the back of the car and drove it home. I let the bees have a small opening until around 7pm when I ‘walked’ them into the hive I had prepared ealier. See pictures one hour apart.

Bees from swam- going into hive

One hour later- nearly all inside

This is the first time I have successfully done this, the bees have stayed and I am feeding them with sugar solution until they build up the wax frames and can find and store enough of their own food ( probably once it warms up).

We are surrounded by field and woodland, their are Munjac and Fallow Deer about. Normally we don’t see them closeby and hardly ever in the garden although I do have the veg patch surrounded by a 6 foot chickenwire fences to stop the deer eating all the tasty produce.

This year must have been a particularily bumper year for deer, We have had  a couple of Fallow Deer munching on the hedge behind the kitchen and one in our small copse. 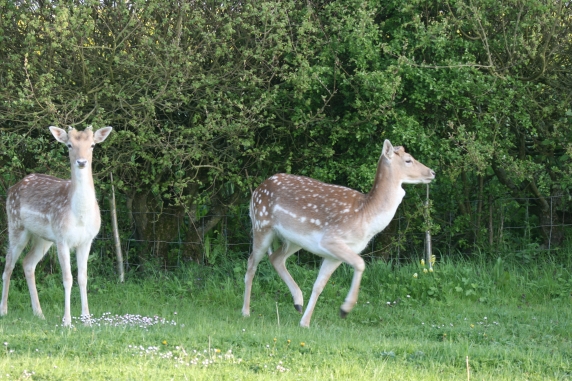 The did trample the electric fence around the hens but have only done this once so I hope they learned to avoid it in future.

The wildlife cam has also shown night visits from a large male Fallow Deer,  a fox  and some Munjac. It is difficult to believe how busy the garden is at night.

Every year we have a Moorhen nest on our pond, some years she manages to raise her chicks and other years they are eaten by cats, foxes, rooks or magpies.

This year there are three chicks all fluffy pom-poms at the moment. Mother Moorhen has been leading them over the grass and feeding them as she goes- it is a lovely sight.

I cannot really understand how the winter has been so miserable for so long. I like cold dry weather but incessant damp cold is miserable. The allotment has been blown about, rained on and frozen for so long that I am surprised anything is still growing. So far my winter planted onions and garlic are just showing. The overwintering leeks have just been harvested and the purple sprouting and other brassicas have been eaten by the pigeons as both the bird scarer and cage were blown over. My potatoes are starting to chit and I hope to get them in over Easter but with the ground so cold I may have to wait. Let’s hope we get some sun soon.

Verdant July in the allotment

I have been putting off posting about the trials and tribulations of my allotment this year as I was hoping that the rain would stop for long enough for me to do more than emergency weeding, slug killing and  a little harvesting.

The spring / summer growing period started well, a few dry sunny days and in with the onions and a second lot of broad beans to support winter planted ones. My bird of prey bird scarer made from a bin bag, some support sticks and wire has worked well and kept the pigeons away.  The rhubarb forcer  did its thing and we had some wonderful metallic red rhubarb for jam and for compot.

Then it rained and was cold and rained more on than off for the rest of the summer ( well so far to mid July). The  weeds, especially the comfry, went mad and grew overnight filling up all available space.

In the few dry spells potatoes ( Anya and Miro Sapho) were planted and seem to be doing well. More onions sets  were put  in spring to complement the winter planted ones  and these are also growing as are leeks from seed and garlic.

The broad beans did well , the early planted and later ones ( all Sutton) flowered together and I now have a couple of large freezer bags of beans after having eaten a lot stir fried with garlic and butter. Sweet and delicious.

The garlic has had to be harvested early due to rust but the bulbs seem fine and the bulbs not be eaten are  now drying out on chicken wire under the garden table. I hope the rust will not affect my onions or leeks.

The winter planted white onions all collapsed in early July and are now somewhat optimistically drying on the garden table until I have room to put them where the garlic currently is.

The strawberries looked very promising, lots of flowers and a good covering of leaves. unfortunately with all the rain, the slugs have got to the fruit quicker than I have and most of the crop has been eaten.  However, some fruit was saved together with some black, white and redcurrents. Enough for a small bowl for two.

The globe artichokes are also doing well and provide a bit of a barrier along the fence beyond which the Comfry is king. I have taken to havesting the the globes early when just larger than a golfball and smaller than a tennis ball. These can be steamed or boiled for about 4 – 5 minutes then the outer leaves striped off and if small the pointy end of ther remaining leaves cut off with scissors. The whole head is split in half and any fluffy choke gently removed with a teaspoon the rest can be eaten with melted butter or in a warm oil and vinagar dressing. Larger heads can have all leaves and choke removed after cooking leaving the rubber ring shaped heart which will freeze or can be used as above or in salads or in risotto.

I hope that the weather improves over the coming month at least so I have enough time to get rid of the weeds! 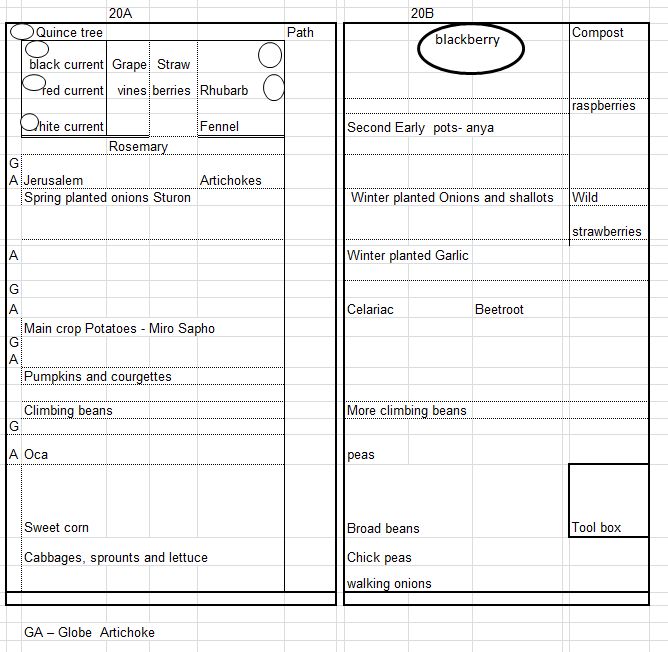