Verdant July in the allotment

I have been putting off posting about the trials and tribulations of my allotment this year as I was hoping that the rain would stop for long enough for me to do more than emergency weeding, slug killing and  a little harvesting.

The spring / summer growing period started well, a few dry sunny days and in with the onions and a second lot of broad beans to support winter planted ones. My bird of prey bird scarer made from a bin bag, some support sticks and wire has worked well and kept the pigeons away.  The rhubarb forcer  did its thing and we had some wonderful metallic red rhubarb for jam and for compot.

Then it rained and was cold and rained more on than off for the rest of the summer ( well so far to mid July). The  weeds, especially the comfry, went mad and grew overnight filling up all available space.

In the few dry spells potatoes ( Anya and Miro Sapho) were planted and seem to be doing well. More onions sets  were put  in spring to complement the winter planted ones  and these are also growing as are leeks from seed and garlic.

The broad beans did well , the early planted and later ones ( all Sutton) flowered together and I now have a couple of large freezer bags of beans after having eaten a lot stir fried with garlic and butter. Sweet and delicious.

The garlic has had to be harvested early due to rust but the bulbs seem fine and the bulbs not be eaten are  now drying out on chicken wire under the garden table. I hope the rust will not affect my onions or leeks.

The winter planted white onions all collapsed in early July and are now somewhat optimistically drying on the garden table until I have room to put them where the garlic currently is.

The strawberries looked very promising, lots of flowers and a good covering of leaves. unfortunately with all the rain, the slugs have got to the fruit quicker than I have and most of the crop has been eaten.  However, some fruit was saved together with some black, white and redcurrents. Enough for a small bowl for two.

The globe artichokes are also doing well and provide a bit of a barrier along the fence beyond which the Comfry is king. I have taken to havesting the the globes early when just larger than a golfball and smaller than a tennis ball. These can be steamed or boiled for about 4 – 5 minutes then the outer leaves striped off and if small the pointy end of ther remaining leaves cut off with scissors. The whole head is split in half and any fluffy choke gently removed with a teaspoon the rest can be eaten with melted butter or in a warm oil and vinagar dressing. Larger heads can have all leaves and choke removed after cooking leaving the rubber ring shaped heart which will freeze or can be used as above or in salads or in risotto. 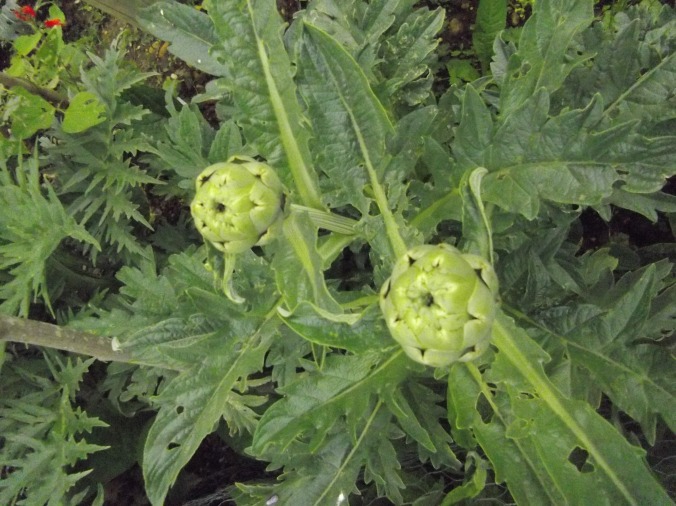 I hope that the weather improves over the coming month at least so I have enough time to get rid of the weeds!